A serious in-flight fire in the electrical-equipment bay of a Boeing 787 Dreamliner flight-test plane forced an emergency landing Tuesday in Laredo, Texas. All 30 to 40 people aboard were safely evacuated on slides.

The fire affected the cockpit controls and the jet lost its primary flight displays and its auto-throttle, according to a person familiar with the incident. The pilot lost some use of the flight and engine controls, which on the Dreamliner are electrically activated, the source said.

The smoke in the back of the cabin of Dreamliner No. 2, where a team of technicians sat at computer workstations monitoring the flight data, was first detected on approach to the Laredo airport after six hours of flying.

As the incident escalated, the pilot declared an emergency, landed the plane and activated the emergency slides.

"The aircraft landed at Laredo at about 2:54 Central Time," said Federal Aviation Administration spokesman Lynn Lunsford. "The aircraft was evacuated on the runway. They pulled the slides."

Flames were seen in the rear electrical/electronics bay, which is underneath the passenger cabin, said two people who were informed of the details.

"If this had happened at 25,000 feet, we might be talking about something much more serious," said a person close to the situation.

Boeing released few details about the incident Tuesday, and spokeswoman Lori Gunter said it's too early to speculate on the cause.

It's also too early to tell if this will affect the flight-test program and defer the Dreamliner's first delivery, currently scheduled for mid-February.

Boeing already faces an unprecedented delay of nearly three years due to supply-chain issues in building the jets.

A former Boeing test pilot, who asked not to be identified, said engineers should be able to find out the cause of the emergency fairly quickly.

A fire will leave "lots of evidence," he said.

"If it requires some sort of design change, that could certainly impact the flight-test program," he said.

On the other hand, it could also be a defective electrical box that overheated, in which case "they'll change it and move on," he said.

The troubled Dreamliner program is vital to Boeing's future. After a wildly successful sales period, the plane still has 847 orders on the books even after some cancellations from all the delays.

One of the jet's innovations is much more extensive use of electric systems.

On most airliners today, most flight-control surfaces and other vital systems are operated by pneumatic controls that use air channeled away from the engines.

But on the Dreamliner, most of the systems — including the hydraulic pumps that manipulate the flight-control surfaces, the brakes, cabin pressurization, engine-starting system and wing ice-protection system — are electrically operated.

Boeing touts this shift as saving energy and reducing the aircraft's mechanical complexity.

During Tuesday's emergency, a small power generator called the Ram Air Turbine (RAT) was automatically deployed. It typically kicks in only when both primary and auxiliary power sources are lost.

The RAT — a device like a small dynamo that drops down from the fuselage and generates power from the air flowing past the aircraft — provides sufficient power for flight controls and other vital systems in an emergency.

The test airplane took off from Yuma, Ariz., early Tuesday in search of hot weather for a test of the nitrogen-generating system that reduces the flammability of the jet fuel inside the wing tanks.

The system injects nitrogen into the space above the fuel as the tank empties; the fuel is more volatile when hot.

The plane originally had filed a flight plan to fly to Harlingen, Texas, but the pilots decided instead to land in Laredo because weather conditions there looked better for their test, Gunter said.

The FAA's Lunsford confirmed the plane had not been diverted due to the emergency.

He said the FAA will look into the incident with Boeing to determine the cause.

Ironically, the crew of technicians aboard the flight had been told in advance to wear warm clothing. The test they were doing during the flight required the air conditioners to be on full blast and the cabin was expected to get cold. 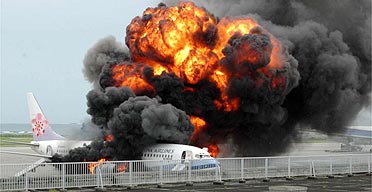