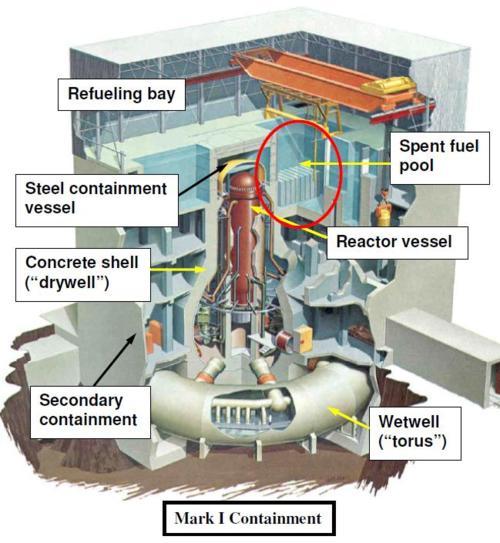 The other effect of heat damage to the fuel rods is that radioactive gases such as iodine-131 and cesium-137, which are produced in the fuel during the operation of the reactor, can be released. The hole in the secondary containment at Unit 4 means that any emissions from the spent fuel will be vented directed to the outside.

If water cannot be added to the pool, or if the pool has been damaged and is leaking, the fuel may remain uncovered. The exposed fuel can get hot enough to melt, depending on how long it has been out of the reactor. If the fuel melts, it would release significant additional radioactivity into the air.

This same scenario could occur at Units 5 and 6 if the water in the spent fuel pools is not replenished, although the fuel there has apparently been in the pools longer and is not as radioactive as at Unit 4. For rods that have been in the pool for long enough, their decay heat will have dropped sufficiently that they will not undergo the same rapid oxidation as newer fuel rods will, and would not produce as much hydrogen.

Thus, depending on the age of the spent fuel in Units 5 and 6, there may be less hydrogen produced if the water level in the spent fuel pool drops. There may still be enough heat to damage the fuel and release radioactive gases, but if the secondary containment is not damaged by a hydrogen explosion, that gas may not be released to the atmosphere.

1356: More from Russia's nuclear chief. He has just said the situation in Japan is playing out according to a worst-case scenario, Reuters reports.