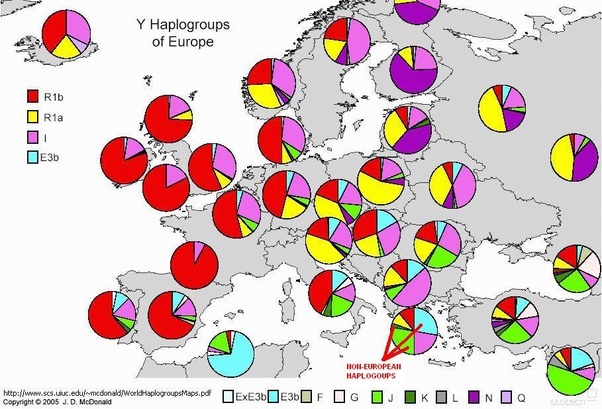 
The early R1b cattle herders would have split in at least three groups. One branch (M335) remained in Anatolia, but judging from its extreme rarity today wasn't very successful, perhaps due to the heavy competition with other Neolithic populations in Anatolia, or to the scarcity of pastures in this mountainous environment. A second branch migrated south to the Levant, where it became the V88 branch. Some of them searched for new lands south in Africa, first in Egypt, then colonising most of northern Africa, from the Mediterranean coast to the Sahel. The third branch (P297), crossed the Caucasus into the vast Pontic-Caspian Steppe, which provided ideal grazing grounds for cattle. They split into two factions: R1b1a1 (M73), which went east along the Caspian Sea to Central Asia, and R1b1a2 (M269), which at first remained in the North Caucasus and the Pontic Steppe between the Dnieper and the Volga. It is not yet clear whether M73 actually migrated across the Caucasus and reached Central Asia via Kazakhstan, or if it went south through Iran and Turkmenistan. In any case, M73 would be a pre-Indo-European branch of R1b, just like V88 and M335.

R1b-M269 (the most common form in Europe) is closely associated with the diffusion of Indo-European languages, as attested by its presence in all regions of the world where Indo-European languages were spoken in ancient times, from the Atlantic coast of Europe to the Indian subcontinent, which comprised almost all Europe (except Finland, Sardinia and Bosnia-Herzegovina), Anatolia, Armenia, European Russia, southern Siberia, many pockets around Central Asia (notably in Xinjiang, Turkmenistan, Tajikistan and Afghanistan), without forgetting Iran, Pakistan, northern India and Nepal. The history of R1b and R1a are intricately connected to each others.
Hacer clic para expandir...