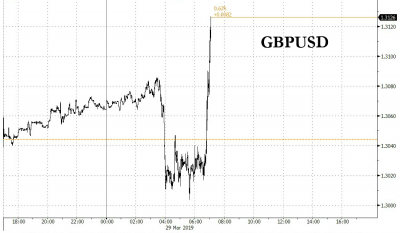 In a stunning turnaround, the pound has surged to a session high, erasing its losses for the day, on reports that Dominic Raab, May's former Brexit Secretary, who famously resigned in November rather than endorse the withdrawal agreement that May had negotiated with the European Union, is planning to back her deal.
There have also been reports that some Labour MPs are planning to back May's deal, defying their party's stated opposition.
Earlier, it was estimated that the deal would be defeated by about 25 votes. But given that Raab could presumably carry some MPs with him, and the prospect of more Labour defections, traders are finding a renewed sense of optimism that Theresa May might just pull it off.