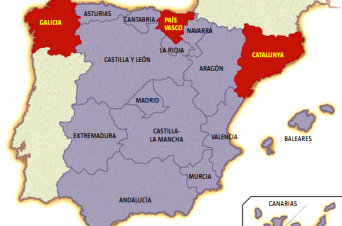 Things are moving fast towards a resolution of the Spanish phase of the euro crisis.

I have spent the best part of the last two weeks in Spain, making a documentary that will air on BBC Two once we know how the story ends.

But right now I am pretty sure how it ends. The tell-tale signs are the briefing notes from the perennial pessimists among analysts, warning of "longer-term problems unresolved".

When I receive such notes I become pretty sure that the short-term problems are being resolved.

Before you shout "hurray" (or start tweeting flamenco themed emoticons, which is the new craze in Madrid): "solving" the crisis short term is a two-edged sword.

Spain's fiscal position is poor. Its economic situation is dire.

There is capital flight: 98bn euros left the banking system in May and June.

The regions are going bust, one by one, with Catalonia recently demanding a 5bn euro bailout and Andalusia already on a 1bn euro drip-feed.

It took the collapse of the Spanish stock market from 8,500 to 6,000, the imminent collapse of a major bank and long-term borrowing costs to spike above 7% before the government of Mariano Rajoy would seek help from the European Union.

The money will be transferred direct to the stricken banks via a government fund - the FROB - once the results of stress tests on the Spanish banks determine the latest guess at the size of the bad debts they are holding.

But Mr Rajoy resisted a direct sovereign bailout of the country itself.

He had already imposed a 65bn euros austerity programme and repeatedly claimed any further austerity, as the price for a full bailout, would sink the country's recovery prospects. "Spain is not Uganda" he texted his finance minister.

So now it was the turn of the European Central Bank (ECB) to move. It had staved off crisis over the winter by temporarily buying up 1.1tn euros of Spanish and Italian debt in the so-called LTRO operation.

On 6 September, ECB boss Mario Draghi announced a new plan for the ECB to spend unlimited amounts to buy the debts of troubled countries on the secondary market: that is - to lend them money by proxy, buying the IOUs from people who have already lent to Spain and Italy.

The ECB said it would also now take junk as collateral - swapping good money for bad across the system - and it would step back from any claim of "seniority" as a creditor: taking its place in the queue effectively alongside or behind private lenders.

However, to access this new, intrinsically soft bailout, Spain would have to apply for a formal bailout from the European Stability Mechanism (ESM). This formal bailout, however small in terms of ready cash, would be the framework for imposing conditions on Spain.

And there is the problem. With lending costs falling on the mere promise of a bailout Mr Rajoy is now hugely tempted to avoid requesting one.

Nicholas Spiro, who runs a sovereign debt consultancy, says: "We're in a situation where we finally have a half-credible bond-buying strategy at the ECB but Spain and Italy are loathe to make use of it.

"The whole market rally has been predicated on Spain making use of it: if you do the numbers and look at Spain's dire financial situation they have to make use of it. We believe it would be preposterous for Spain to try and ride this out."

A senior politician in the Partido Popular told me this week he believed: "The request for a bailout will come."

There are "tough negotiations" going on, with Mr Rajoy trying to minimise the conditions: defending pension provision and health service levels seems to be a red line for Mr Rajoy.

However, the impression I was left with is that it is inevitable that Mr Rajoy asks for a bailout, and that the process gets under way.

Mr Spiro says it is not the concrete conditions that the politicians in Madrid fear but the scrutiny and supervision that comes with it: the "men in black" from the so-called Troika of EU, ECB and IMF.

There are three milestones that might determine the time scale: Spain has to borrow 30bn euros in the markets before the end of October.

Two: Spanish regions - Galicia and the Basque Country - face elections on 20 October. And the stress test results on the Spanish banks are due imminently.

It seems obvious to me that Spain will probably be asked to make one headline-grabbing sacrifice as part of the bailout, but will not be pushed beyond what analysts call the "speed limit" of austerity: that is forced to cut so fast that (a) the economy tanks and (b) the deficit reduction plan itself is pushed off course.

In addition it is likely that the bailed out banks are forced to disinvest in the various corporate stakes they hold - from airlines to hotels.

Controversially, those who bought preference shares in the busted banks - small savers encouraged to commit their money long-term by exposing it to the risk of bankruptcy - may lose some or all of their money.

Joaquin Almunia, the EC commissioner in charge, told me in Brussels on Thursday there was no way taxpayers in Germany could accept that these savers would not lose money - though the Spanish state could compensate those who were mis-sold the shares.

Despite the pain and political dissatisfaction, a "conditions-lite" bailout would seem a neat solution to the acute phase of the crisis, which exploded last spring as the eurozone floundered over Greece and Spain.

But it brings problems of its own. Spain, with its 25% unemployment, its minus -1% growth, its falling wages, its relentless flow of deposits from the banks should feel like a country in the grip of recession.

But it does not.

The late night bars of Madrid are maybe only a third as full as they were during the boom, and maybe some of them are closing by midnight and the swish tapas bars may be less exuberant at lunchtime, but across large parts of urban Spain this is not yet economic catastrophe on a Greek scale.

And the business and political elite is in something close to abject denial.

There is protest: Spanish youth protested in May 2011, forming the so-called M15 movement, with hundreds of thousands involved; and 1.5 million Catalans went to the streets last week to demand fiscal autonomy from the Spanish state.

There will be big demos this Sunday, and I have spent days following the itinerant land workers demo in Andalusia.

But Spain is nowhere near yet as unstable as Greece.

If Spanish people have not yet revolted on the streets with Greek intensity it is in part because the poor have fallen back on the family while the middle class have not yet reached Greek levels of frustration.

Spain's economy is not just bigger than Greece - it is more resilient. But it is not the resilience of a modernised economy.

Productivity here has been flat for years. The self-employed and small business class are encumbered by a net of regulations and payments that makes entrepreneurship difficult.

Corruption, once the surface has been scratched, is rife.

In the region of Valencia alone there are some 250 officials and politicians under investigation for corruption.

In Mallorca, the King's son-in-law, the Duke of Palma, faces trial over corruption charges.

But Spanish politicians - from both the ruling Partido Popular and the opposition Socialists - routinely reject the idea that corruption has been systemic.

Many of them grew up under Franco and believe the country's transformation has been massive and genuine.

Here, again, Spain is not Greece. One of the most startling things a politician has ever said to me was when the-then Greek finance minister George Papaconstantinou told me, on the record, that the country was "basically corrupt".

Many foreign business people operating in Spain will tell you loudly that this is true there also. But the country's own leaders cannot accept it.

Joe Haslam, an e-commerce entrepreneur and past president of the Spanish Irish business network in Madrid, says that beyond the corruption issue there is a problem with an old business and political elite:

"That even in the face of horrific unemployment very obvious reforms such as making it easier to start a business haven't been carried out is ominous. It may well be that in Spain, just as Max Planck said about science, that no advances will happen until "opponents just die out".

"The heads of the IBEX35 companies are predominantly old men in grey suits. The world of diversity, curiosity and rapid innovation is not the world they know.

"You would wonder how many of them have ever downloaded an App?"

If Spain does go for a bailout the danger is it leaves too many of the problems that caused the crisis unresolved.

Will the banks be honestly stress tested and recapitalised to impose losses on those who invested badly?

Will the regions who built massive vanity projects - Valencia has a 400m euro opera house but temporary schools built out of sea containers - simply squander the taxpayers money of Germany and the Netherlands, just as they squandered their own?

And will any of the men responsible for taking this major economy to the brink of collapse be brought to account?

Mr Haslam warns: "Whoever controls the banks controls Spain and so politicians will do everything they can to emerge from the crisis still in control of them."

As problems, these are nicer ones to have than the problem of the collapse of the euro and a depression across the continent, which is why Germany has finally relented and allowed Mario Draghi into a bond buying plan that will keep the single currency alive.

But they are still problems, and they could still - further down the line - lead to Euro fragmentation if German taxpayers see conditionality flouted and the money wasted, and as the reprieved political class goes on a binge of "build, baby, build."

Though we already have three case studies of what happens when Europe imposes harsh austerity, we have no way of predicting the impact of a soft bailout that allows a hot-country gerontocracy to spend cold-country taxes.

Meanwhile, for the Spanish people, times are about to get even tougher. If the Spanish debt crisis is decisively resolved in the next few days or weeks, the social and political crisis is nowhere near its climax.

For there is still a chance that the coming collision between working Spain and the old men of politics spins out of control; that regions go bust; that the perennial cool and good humour of protesters runs out.

Everybody admits there is a crisis of belief in politics. The sight of Mr Rajoy going cap in hand to Frankfurt at last - less than a year into a premiership founded on everything being hunky dory - will leave him, and his administration, weakened.

In short, Spain might not be Uganda, and it is not Greece, but it is still Spain - and the after effects of the biggest financial folly ever seen in Europe are not over.
Hacer clic para expandir...

...
For there is still a chance that the coming collision between working Spain and the old men of politics spins out of control; that regions go bust; that the perennial cool and good humour of protesters runs out.
...