«vamos a salir mas fuertes, no dejamos a nadia atras» 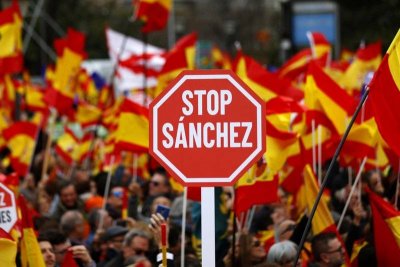 Yo he leído (traducido con google) el enlace original: The uncovering of the vaccination data in Israel reveals a frightening picture-הודעות של נקים

2.March.2021 update:
- this article has been published first in hebrew here
- we gave an interview in French to francesoir.fr who translated it in french here
- it has been as well reported in russian here in english in Arutz 7 here and in the U.S here
- and reported in several other language including greek here
this article can not be debunked since it is based on real data that have been exposed but since its publication the Israeli ministry of health and the Pfizer/Moderna coalition keep trying to deceive the public with biased "scientific" article (like the new england journal of medicine)that intentionally focus on the Covid sickness two weeks after the 2nd shot and hide the most important data that is the death numbers among the vaccinated people from covid and other adverse effects after the first shot.The fact that Dr Ran Balicer the corresponding author of the NEJM publication, works for the Israeli health department as head of the Klalit research institute and received grants from Pfizer may explain it...as well as 7 other co-authors of the publication.. see here
we have debunked the NEJM study please read our article:
Exposing distortions in the NEJM scientific publication on the efficiency of Pfizer's vax

Second draft
On February 11 2021 Ynet (the most known Israeli News website) published a confused and confusing article entitled "Vaccination efficiency data in Israel, and its rapid effects on the young".

Our reanalyses of these data explain why during the massive vaccination project initiated mid-December 2020 during a confinement, daily new confirmed COVID-19 cases failed to decrease as they do during confinements, and, more importantly, why numbers of serious, critical and death cases increased during that period that covered at least one month. From mid-December to mid-February (two months), 2337 among all Israeli 5351 official COVID-deaths occurred.Our analyses indicate orders of magnitude increases in deaths rates during the 5-week long vaccination process, as compared to the unvaccinated and those after completing the vaccination process. Presumably, asymptomatic cases before vaccination, and those infected shortly after the 1st dose, tend to develop graver symptoms than those unvaccinated.
The Ynet article is organised in an exciting way and uses data provided in an erroneous way by the Ministry of Health. It is unclear whether this was intentional to prove the vaccine's efficiency or if this was done erroneously because the provided data were misunderstood.Note that in Israel, all vaccines are from Pfizer.

We bring a very important example from the article, in relation to the table provided by the Ministry of Health. As per the text "However, 546 among the dead were such that were not at all vaccinated or got the first vaccination dose within two weeks before their death" differs from the table. This is clearly unfounded because all data presented in the table and provided below describe only COVID-19 patients that got at least the first vaccination dose. This is clear from examining the table. The grand total is 43781 COVID patients who got the first or the second vaccine dose. Among the total of 660 deaths, 546 got only the first dose.
The data in the table, rather than indicating the vaccine efficiency, indicate the vaccine's adverse effects. 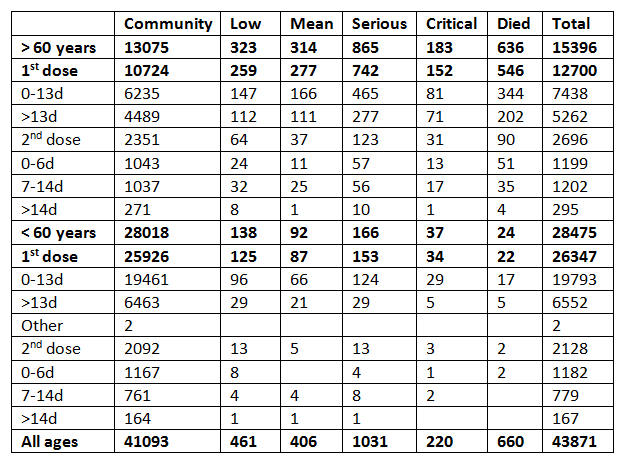 For that purpose we need first to understand that the provided table describes the state of COVID-19 patients that got the first or the second vaccine dose at given dates, as started in the article "…emerges from the data that among 856 patients above 60 years in serious state hospitalized at this time…" we assume that the article published February 11 reflects the situation in hospitals the previous day, hence February 10 2021, or February 11 2021.
On February 10, the number of serious active cases was 1056 according to the control panel of the Ministry of Health, see photo below. 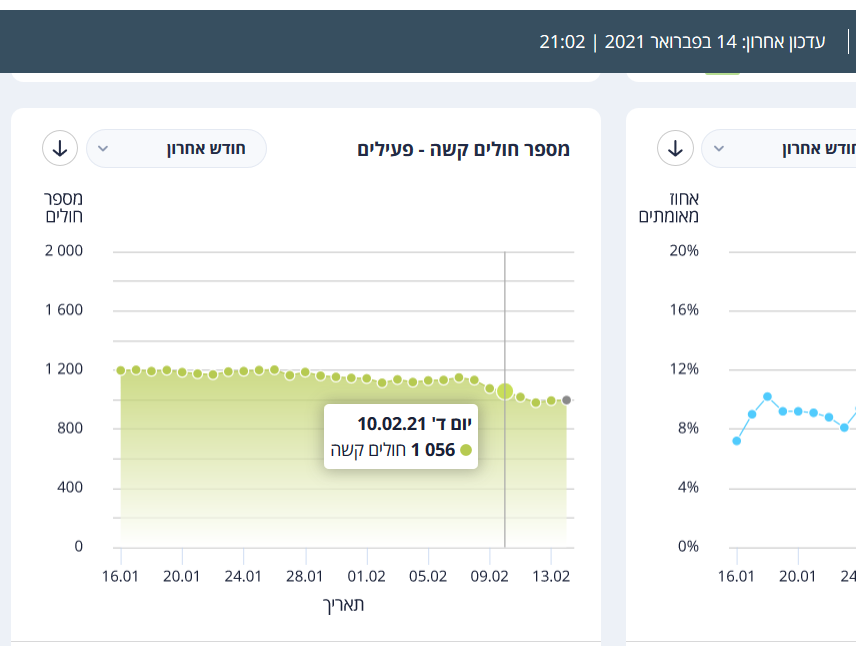 This surprisingly shows that most serious hospitalized cases on February 10 or at a near date were in fact vaccinated with the first dose or up to two weeks after the second dose. See the table of the vaccinated patients showing 1031 serious and 220 critical cases at the time the table was done. This matches the article in hebrew from February 1st 2021 "Can one show that the vaccine from Pfizer is today's major cause for high death rates in Israel and the world?".
However, this is not the last surprise we get from examining the data from the Ministry of Health.
We can substract the number of people with the first vaccine dose on January 19 2021 from that on February 10 2021. During these 21 days, 1331881 Israeli citizens got the first dose. The table shows that 568 among these died, hence 0.042% and that 39047 among them became a COVID-19 case, hence 2.9 %.
For the 2nd dose we focus on data specific to two weeks after the 2nd vaccination according to the table.

From January 26 to February 10 2021 909102 Israeli citizens got the 2nd vaccine dose. Among these according to the table, 92 died, 0.01%.
Hence, during the 5 weeks since the first dose at least 0.05% of first dose recipients died. This death rate relates mainly to a relatively young population whose vaccination stated on January 19, a period during which most vaccinated were below 65.
In order to estimate the death rate of those above 65 which were mostly vaccinated before that period we use data reported by the USA-based VAERS,

There we found, see article in english, that the ratio of deaths by those above 65 vs those below 65 is about 4.42 (155/35). Hence the death rate of those above 65 between the first and the second vaccination dose should be until January 19 0.042 (the death rate of those below 65) multiplied by 4.42, resulting in 0.186%, which is close to the 0.2% reported by the Ministry of Health on January 21 2021.
This value of 0.2 % death has been mysteriously modified later on by the Ministry of Health and was switched to 0.005 without any explanation, see article in hebrew. Above considerations show that the death rate data provided first were correct, the updated death rate data might have been intended to suggest lower death rates among the elderly.

This scary picture also extends to those below 65, among which, for the 5 weeks during the complete vaccination process 0.05%, meaning 50 among 100000, died. This is to be compared to the 0.19 per 100000 dying from COVID-19 and that are not vaccinated in that age group, as per the above table. Hence the death rate of this age group increased by 260 during this 5-week period of the vaccination process, as compared to their natural COVID-19 death rate.

We conclude that the Pfizer vaccines, for the elderly, killed during the 5-week vaccination period about 40 times more people than the disease itself would have killed, and about 260 times more people than the disease among the younger age class. We stress that this is in order to produce a green passport valid at most 6 months, and promote Pfizer sales.
These estimated numbers of deaths from the vaccine are probably much lower than actual numbers as it accounts only for those defined as COVID-19 deaths for that short time period and does not include AVC and cardiac (and other) events resulting from the inflammatory reactions in tens of reports documented on the NAKIM site, which themselves are only the iceberg's tip, see here.

This does not account for long-term complications described in a criminal complaint filed in December 2020 in France and which was translated to english, see here.
Looking back, this explains why the serious COVID-19 cases increased as vaccination started, and why cases started to decline when vaccination was opened to the young and continue to decline as the vaccination national campaign is losing its momentum.


We hope that this massacre will not include those below 13, as these have an increased adverse reaction rate, including death, to vaccines as shown by multi-decennial data from the VAERS reports in the USA.
We summarise that the pandemic may be predicted for the coming weeks. The decrease in vaccinations and in vaccination age will cause a decrease in serious cases, mainly not because of the protection by the vaccine, but because fewer people will die from the vaccine and other adverse vaccine reactions.

This will be temporary as in a few months we expect to face mid- and long-term adverse effects of the vaccination as ADE (Antibody-dependent Enhancement) and the vaccination-resistant mutants selected by the vaccines. But this should occur after the soon coming elections and the (survivor) voters won’t have another opportunity to express their disappointment at the voting poll.

Thanks to Dr Hervé Seligmann for his huge support on data analysis.